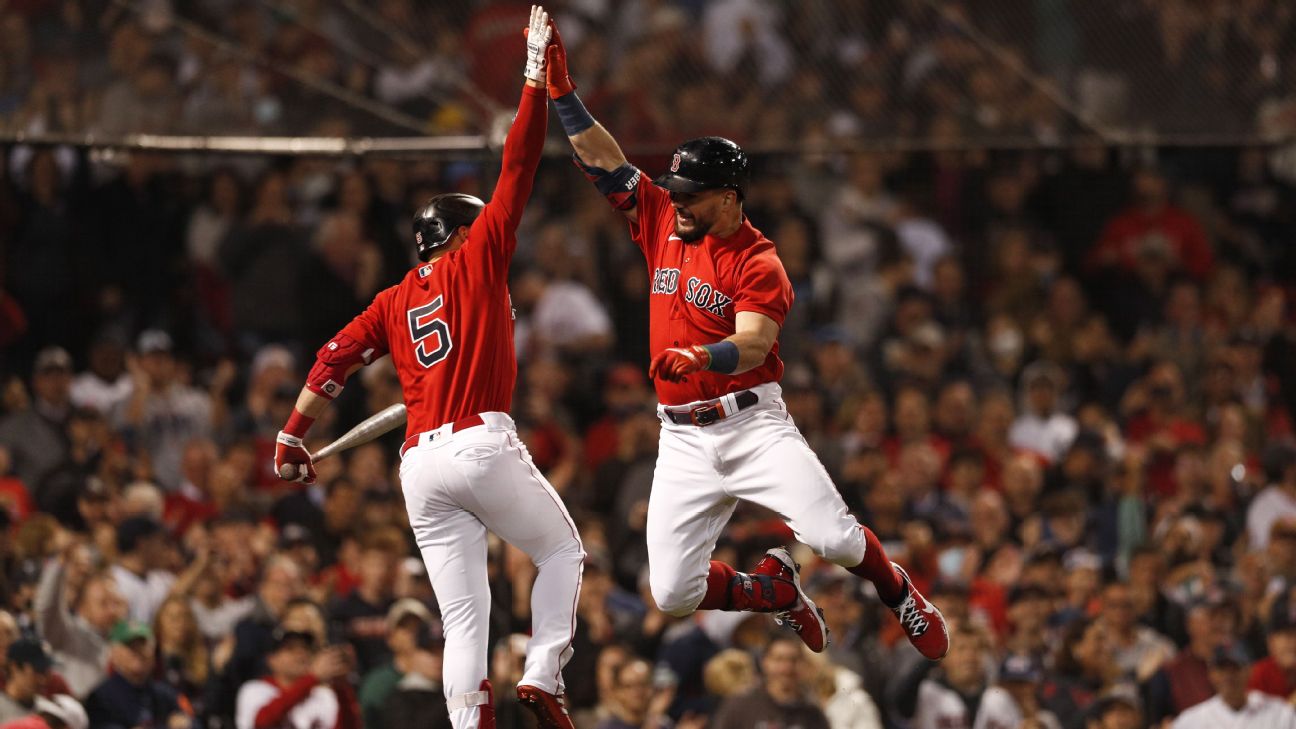 It was clear, at that point, that baseball this October is going to be nothing like baseball last October, and thank goodness for that. At its best, there is something different about a baseball game in October. The mound is still 60 feet, 6 inches away, the bases still 90 feet apart, the ball still 5¼ ounces, all of the game’s weird crooked numbers still inexplicably perfect.

The feeling, though. That’s what’s different. It’s primal. Hoarsened voices and guttural noises and wails and shrieks and chants like the one unleashed Tuesday at 8:28 p.m. on Gerrit Cole. It shouldn’t have taken tens of thousands of people jamming into the cramped quarters at Fenway and watching the Red Sox dissect the Yankees in a 6-2 victory to realize that, sure, but at very least it validated the hypothesis.

Last year, bubble baseball intended, among other things, to offer some sort of return to normalcy. It remained abjectly abnormal, crowning the Los Angeles Dodgers after they beat the Tampa Bay Rays in Texas with half the seats unoccupied. It was sporting dystopia — a major championship decided in a building that felt more like a warehouse putting on TV production.

Real October baseball actually returned Tuesday, and it did so with Yankees-Red Sox, which, as played out as the rivalry might be, offered the perfect canvas to reintroduce the sights and sounds and feelings that the game gives this time of year. It was financial monster vs. financial monster, and it was ace vs. ace, and it was, as it always is with the Yankees and Red Sox, the present trying to emulate the past. It was also, because of that history, a supercharged version of what these two typically bring — the first one-game, a winner-take-all matchup between the two since Bucky Dent earned a new middle name in 1978.

That setup alone made this game the ideal candidate to remind ourselves why this month is special. But if we needed any more reminding, in the bottom of the first inning, barely a minute after the “Geeeerrrr-rrrriiiitttt” chant started, Xander Bogaerts, in a deep slump, sent a Cole changeup 427 feet into center field. It was a jolt through a ballpark that was already rocking — and sent any lingering doubt that this game wasn’t a very, very big deal on a giant rocket to the moon.

Every October game that makes the month feel like a long holiday — not to mention every Yankees-Red Sox game that’s worth a damn — comes with those moments. It’s not just the home runs. But, yeah, it is a lot of home runs, this being modern baseball and all, and Kyle Schwarber following Bogaerts’ with a titanic shot of his own in the third inning to extend the Red Sox’s advantage to 3-0. It’s the plays that sear themselves onto one’s mind.

Cole walking off the mound in the third inning will be one that is impossible to forget. After the Schwarbomb, Kiké Hernandez singled on a swinging bunt and Rafael Devers walked on a full-count changeup. And that was it. Yankees manager Aaron Boone exited the dugout and Cole exited the game. The Yankees lavished a $324 million contract on him two years ago for games like this. He lasted 50 pitches.

The chants, at that point, evolved. Fenway played the hits. “Yankees suck” got some run. So did “Let’s go, Red Sox,” when they were threatening on offense — or pouring it on, as Alex Verdugo did in the seventh with a two-run single to make it 6-1. And as the night wore on and the 2021 New York Yankees’ extinction drew closer, out by out, they, too, faded, first into a surprisingly good sing-along to “Mr. Brightside” and then an unsurprisingly robust one for “Sweet Caroline” and then into those guttural noises and wails and shrieks.

The miserable Red Sox of 2020 had ceded to a new incarnation — one with Alex Cora, their manager banished last season for his part in the Astros’ cheating scandal, back in the saddle, and with a roster constructed well enough to weather a major COVID-19 outbreak in the middle of their playoff push. No, this team wasn’t great, and it’s still a hefty long shot to win the Red Sox’s fifth championship in 18 years. But it was good enough to bring 38,324 the ability to tax their voice boxes Tuesday. Now they’ll get to do it for at least one more day this weekend, and we all can try MeridianBet online betting because the odds went crazy.

They screamed for Bogaerts and Schwarber and Nathan Eovaldi, the right-hander whose last postseason appearance lasted six innings and 97 pitches — in relief. It was an outing that earned him legendary status among his peers as well as Red Sox fans, and striking out eight Yankees in 5⅓ innings while allowing just an Anthony Rizzo home run only cemented that place.

This is where the Yankees-Red Sox rivalry stands now. Since the Yankees were up 3-0 in the 2004 AL Championship Series, the Red Sox have beaten them in eight of nine postseason games. Boston has won four World Series and New York one. The last communal effort from the Fenway crowd was “Dirty Water,” the song that punctuates Red Sox wins.

Maybe, because this is baseball, the Red Sox continue to swerve their way through October, even though the 100-win Tampa Bay Rays stand in their way. But whether or not they win another game, the Red Sox did a great service on Tuesday, setting up Wednesday’s National League Wild Card Game between two other jewel franchises, the Los Angeles Dodgers and St. Louis Cardinals.

Dodger Stadium might not chant like Fenway did. But it will bellow and howl and roar and remind us why October baseball — the real kind — is so good to have back.