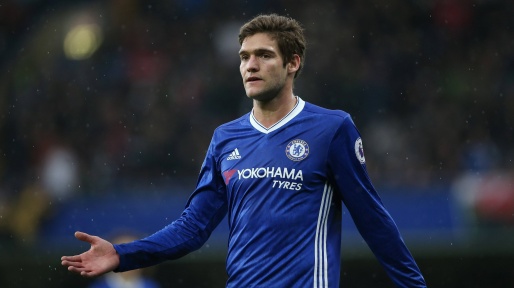 Marcos Alonso has explained why he will no longer take the knee before Premier League games.

Before every single Premier League game since ‘Project Restart’ in June 2020, players, officials and coaches have all taken a knee as one to unit against all forms of racism.

Ivan Toney and Wilfried Zaha have also stopped taking the knee, and Marcos Alonso will now join them.

The Spanish left-back, 30, has not taken a knee in recent games for Chelsea and after his man-of-the-match display against Tottenham on Sunday, he’s been talking about the anti-racism gesture.

What did Alonso say?

“I am fully against racism and I’m against every type of discrimination and I just prefer to put my finger to the badge where it says No To Racism as they do in some other sports and football in other countries,” Alonso said. “I prefer to do it this way and, of course, to say very clearly that I am against racism and I respect everybody.”

Asked if this decision was political, this was Alonso’s response.

“No, we haven’t talked about it,” Alonso said. “We are in the changing room and we are like a family. I have a very good relationship with everyone, I love everyone and up to now we haven’t talked about it. I don’t think there is a need to, but, of course, if I have to speak to anyone, I will say the same thing I just told you and I don’t think there will be any problems.” So until the next match, we could check out the best betting site MeridianBet.